Soy: good for prostate cancer or not? 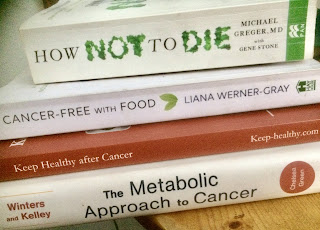 I’ve been reading a new book by Liana Werner-Gray ‘Cancer Free with Food’ that came out last year. It is an excellent overview which is easy to read with some great concepts to help us shift to more healthy nutrition.

In particular I liked her section on upgrading your diet; about flooding the body with nutrients as we ‘upgrade’ our thought process. So a worse-case scenario might be processed foods, high-sugar, high fat….to upgrade would be an organic option while a best upgrade might be to use your own organic high-quality ingredients and make it yourself. As Liana Werner-Gray writes: “Living this way reduces guilt. Deprivation diets will only drive you crazy, leaving you feeling worse than when you started.”

However for me diet and nutrition wasn’t about incremental changes. I agreed with Chris Wark when he calls for the need for a 'Massive Action Plan’ and for me that meant going straight to the best upgrade where possible. Indeed changing diet after I was diagnosed was relatively easy - I will eventually get around to a blog on that. What has been less easy is unpicking those grey areas - we are all different so feeling into whether certain foods are good or bad for my particular metabolism and cancer is not so easy. I’ve already blogged on gluten and coffee, this blog is soy - an issue we recently discussed in our Wigwam group - and an issue that is not so straight forward.

As noted I really liked Liana’s book but a couple of bits in the book made me look again at the research. To be fair I guess it is not possible to write about food without some part of it being challenged by other research. Anyhow one of the bits that unsettled me was the repeat of the info regarding soy; one of her three tips for prostate cancer was to ‘avoid unfermented soy products like tofu and edamame, which can raise oestrogen levels…Fermented soy products like miso, natty, and tempeh are acceptable - and good sources of vitamin K2' (i).

Liana is not alone in saying no to soya if you have prostate cancer - or for that matter breast cancer - indeed the research is mixed and the facts are not so straight forward. I was at Trew Fields last year when I heard Professor Robert Thomas talking. He was clear that soya was OK for those with prostate or breast cancer.

I have since bought the 2020 edition of Professor Thomas' book, ‘Keep Healthy after Cancer’. He writes, “After cancer, soya products, particularly the more easily digested such as fermented varieties reduce the risk of relapse and improve chances of overall survival.” He goes onto describe the science about how they impact on oestrogen, not in the way Liana suggests. He writes, “In sensible amounts, phytoestrogens in these foods attach to the oestrogen receptor (ER) but only have weak activity. They consequently dilute the effect of the body’s own oestrogen by blocking the receptor. Genistein (from soya) attaches to the ER in the same way as tamoxifen - inhibiting oestrogen effect on tumours.”

Indeed as they bind more weakly they wash through the body easily. Some experts like Professor Trevor Powles call them ’anti-oestrogens’. Pulses, like lentils, red kidney beans, chick pea and soya, and some herbs like Red Clover are great sources of phytoestrogens. Professor Thomas quotes research confirming the benefits of soya to those of us with both breast and prostate cancer. He suggests that a study that challenges this is from California; in that study he says the data has been influenced by cheap soya products, phytoestrogenic supplements and highly sugared ice tea which the authors included in the questionnaire as a recognised isoflavone source.

On the Canceractive website, Chris Woollams agrees, he writes that cancers that are hormonally driven can be limited by soy or soya. He explains that "There are three groups of oestrogen. Human oestrogen, chemical oestrogen and plant oestrogen. Human oestrogen is not a single hormone but a family of hormones, some aggressive, others less so. The most aggressive is oestradiol, made by aromatase enzymes in the fat stores of both men and women and which can bind to receptor sites on the membranes of healthy cells and send havoc messages into the cell. Oestradiol can drive cancers.(ii)” As noted above this is different from plant oestrogen. 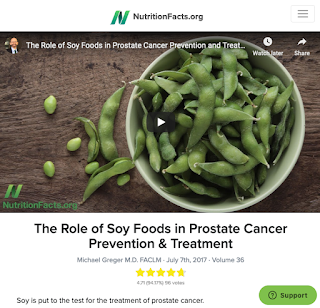 In a short film by nutritionist doctor, Michael Greger (iii), soy is put 'to the test’ in terms of its role in prostate cancer - and the results are not terribly conclusive. One study of 20 men with prostate cancer who were relapsing after radiation or surgery (their PSA was rising), found that after a year of drinking three cups of soy milk a day, 6 got better, 2 got worse ands 12 remained unchanged. And again in another of Gregor’s films he looks at unfermented soy foods and shows that they could lower risk of prostate cancer (iv).

The picture gets more complicated

But wait, just to confuse the picture a bit more...Nasha Winters and Jess Higgins Kelley in their book, “The MetabolicApproach to Cancer” (2017) which I bought after hearing her talk at Trew Fields, says that 30-40% of adults produce a powerful isoflavone after eating soy - they note that these individuals may benefit most from eating soy. There is also a crucial gut bacteria that plays a role and they argue these factors are probably why research results have shown mixed benefits. It also can explain the better cancer rates in Asia than here; Asian populations are more likely to be able to produce that powerful isoflavon after eating soy.

Another factor that Nasha and Jess point to is that Asian soy products like fermented soybeans ie tempeh and miso, may be better than Western soy products like soy milk, soy-based veggie burgers and the like. This goes against what Gregor found in terms of protection from cancer; this of course maybe different if you already have cancer. Clearly this is confusing!! Nasha and Jess note that they rarely recommend soy, but they do recommend taking hormone balance seriously.

Oestrogen levels are crucial to all of us with hormone-related cancers so this is all serious stuff. Dr. Rob Rutledge, Radiation Oncologists concludes that on balance soy is probably good for those of us with prostate cancer - I think, for me, I get from all of this, that soy is to OK in ‘sensible amounts’.

It is worth noting that phytoestrogen supplements are to be avoided. They have been suggested in an online forum to help manage the terrible hot flushes that I have experienced while on hormone treatment - hot flushes that are still severe and waking me several times every night despite stopping the injections more than two months ago. I am told things will get better in coming weeks but it feels like my body is battling to rebalance itself. Anyway the evidence around such supplements is not huge but does look like it could have a negative impact on health - so I take that as a warning to double check any online suggestions! Don’t take my word for any of this!

To conclude, revisiting soy in this blog has been very helpful to remind me, that now, as I finish the hormone treatment, I need to seriously try and rebalance my hormones. In short that means for me in terms of reducing oestrogen, flaxseeds (uncooked and ground as they only stay fresh for 5 hours), sesame seeds and curly kale - these three are part of my diet every day - well kale not quite everyday! (italic added to make clearer)

There is a fair bit more in terms of hormones and I suggest Nasha and Jess’ book; perhaps also I will blog on this soon. I am sure that my oestrogen levels will be up after the treatment (see my recent blog here with a look at hormone levels) - they certainly were last time I took hormones.

(i) Alot of her book info is available online; here is her section about prostate cancer: http://www.cancerfreewithfood.com/prostatecancer.html#/
(ii) https://www.canceractive.com/article/soy-soya-milk-and-cowsacute-dairy
(iii) https://nutritionfacts.org/video/the-role-of-soy-foods-in-prostate-cancer-prevention-and-treatment/
(iv) https://nutritionfacts.org/video/Fermented-or-Unfermented-Soy-Foods-for-Prostate-Cancer-Prevention/
(v) https://youtu.be/ehdpeAK9nNY at around 14mins
at May 12, 2020