Second round of hormone treatment

In this blog I want to cover my experiences of the last five months on hormone treatment then in the next blog look at my radiotherapy treatment. This is my second round of hormones; you can see my comments on round one here (i) and here why I started this second round (ii). Update 2/03/20: You could also read my blog on nocebo effect here as could reading about this stuff impact on how we experience treatments?

I am still very confused by the role of hormone treatment in prostate cancer. However, as noted before, research has shown the best results have been achieved when combining hormone therapy and radiotherapy (iii). The problem lies in that hormone control cannot be a long-term strategy. The body fights back against the extra hormones; working harder to make even more of the depleted hormone. In the earlier blog (i) I also mentioned how lowered testosterone and higher oestrogen in men is linked to prostate cancer and how this is challenging orthodox theories of prostate cancer. I’m not revisiting that debate now other than to point to a useful article by Chris Woollams, "Prostate cancer and testosterone: has orthodox medicine got it wrong?” (iv). 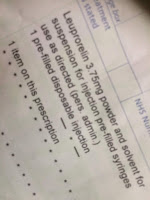 So when should I stop taking hormones?

My last injection, which lasts three months, is coming to an end although symptoms will persist for many months more. I am keen to not have more hormones after my radiotherapy (which finished this last week) but my oncologist is suggesting 6 months or 2 years. There is some interesting research showing hormones can increase survival rates but I need to look more closely at that! Certainly part of my decision making will include looking at the natural bioactive compounds (v) that can act as aromatase inhibitors to inhibit the production of oestrogen. So all that for another blog!

So this time I started in September last year with a month of 50mg Bicalutamide, then after two weeks had an injection of Leuprorelin (a month dose), then when that expired I had a three month injection. At my request I understand this was a slightly reduced amount of hormones, although, having now spoken to others I am not sure how reduced it was! The Bicalutamide is about blocking testosterone receptor sites on the prostate cells with anti-androgens and the leuprorelin is about cutting the production of a pituitary hormone that causes the synthesis of testosterone in the testes. Leuprorelin is what is called a luteinizing hormone-releasing hormone (LHRH) agonists - wow these long names can take some getting used to! 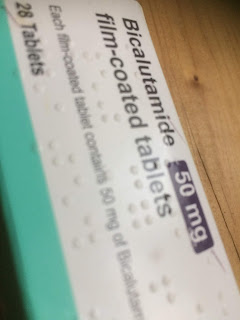 I’ve been warned that when patients receive an LHRH agonist for the first time, they may experience a phenomenon called "testosterone flare." This temporary increase in testosterone level occurs because LHRH agonists briefly cause the pituitary gland to secrete extra of that luteinizing hormone before blocking its release. The flare can make symptoms worse for example, bone pain or 'bladder outlet obstruction'. Not an issue for me this time. The increase in testosterone is usually countered by giving another type of hormone therapy called antiandrogen therapy along with an LHRH agonist for the first few weeks of treatment; hence the Bicalutamide.

Side effects; my experience 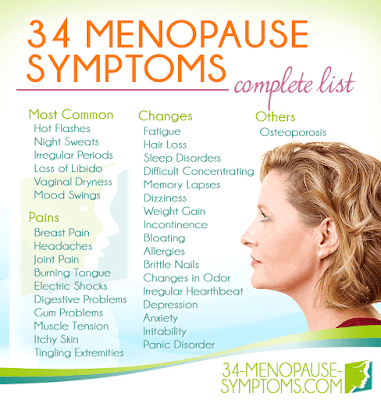 My own experience of hormone treatment first time around wasn’t great in terms of side-effects (i). However we are all different and talking to quite a number of people now I realise how different experiences can be; some have got off lightly, others been much worse. Certainly key is how fit you are starting the treatment this will determine a lot in terms of how you come out at the end. Hence important re exercise - something I’ve mentioned repeatedly in this blog. Anyhow for those interested here are my experiences this time;

Well the NHS won’t measure hormones unless there is a clear problem. However after reading the Woollams article and others it seems key to keep an eye on levels where possible. I’ve only had two tests in the past (see below); one as I started treatment in Germany ie before taking hormones, then a test done privately a year on. The first test showed OK levels apart from progesterone which is implicated in prostate cancer although it’s role remains undefined. The second test was six months after the hormones ended and perhaps not surprisingly showed raised estradiol (ie oestrogen) and lowered free testosterone. 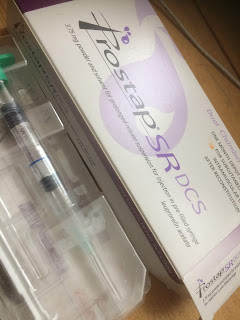 After the second test, being aware of the dangers of oestrogen, I took a number of steps to try and reduce it. For example taking Indole 3 Carbinol (I3C) and increasing foods like kale and broccoli (viii). I stopped this supplementation when I started the current hormone therapy in September as wasn’t sure about the impact of doing them at the same time.

Update 5/03/20: Interesting article understand re oestrogen here (xi) - well I think it could be interesting if I understood it!

It seems important to measure hormones again soon, as I suspect I will need to take further actions to reduce oestrogen after these past months on ADT. Indeed Chris Woollams considers oestrogen as one of the key players in possibly causing prostate cancer. He writes ‘research is increasingly clear that prostate cancer risk is not linked to high testosterone but that the female hormone oestrogen (estrogen), saturated fat consumption, low melatonin, low vitamin D and infection are more likely causes’(ix).
Any thoughts welcomed? As always this blog is not advice to anyone else but a continuation of my own research and interest in my treatment.

Email ThisBlogThis!Share to TwitterShare to FacebookShare to Pinterest
Labels: Hormones