Another update; radiotherapy and hormones the way to go?

This blog updates on where I am at in terms of thoughts about next steps. I’ve just had another PSA test and it’s up to 13. This is not high compared to many folks and not high to what it was two years ago but it has consistently risen over the last eight months from 5.5. So now what next? I’ve also seen my oncologist for the first time in seven months - this time in Cirencester. Since diagnosis I’ve been to the Forest of Dean, Cheltenham, Gloucester and Tetbury; I guess there are still other Gloucestershire hospitals to visit!

Well as we know the PSA is not a great test - see my previous blog here. I also noted in a previous blog, when I was delaying treatment, that Dr Daniel George, Professor of Medicine and Professor in Surgery at Duke University (i), notes that: “there is a strong correlation between a shorter PSA doubling time—a shorter time to bone metastasis—and shorter overall survival...If doubling time is a year or longer, these are slow-growing cancers.” The implication is that mine is faster growing as it has doubled in nine months. In that blog looking at delaying treatment I also noted that other indications like the Nagalase test and Triglycerides suggest no signs of the cancer spreading. 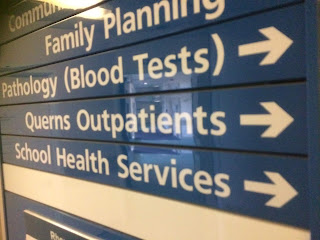 With such little good information it is hard to know what actions to take. My oncologist, when asked about survival rates, suggested I go on the Memorial Sloan Kettering website and use their predictive tool. The so-called “Kattan nomograms” on the Memorial Sloan-Kettering Cancer Center web site looks at outcomes before and after surgery (ii). Well I’m not having surgery but it still gives some indications as radiotherapy has similar survival rates. When I put in my figures it comes back with a lovely high figure for reaching ten years after treatment; better than those previously quoted to me. However it only gave a 38% chance of being free of cancer in five years and 25% chance at ten years. Is this due to treatment not being successful at eliminating the tumour or is it about the treatment itself, as we know, causing cancer to come back stronger?

Predictive tools do vary and clearly do not take account of all the other actions folk take to manage their health (iii). I have been very wary of them and so agree with the wise words of Sophie Sabbage in her book, “The Cancer Whisperer”: “Avoiding Statistics: staying away from soul-sapping, fear-inducing information that discusses indicators, but not inevitabilities.” That doesn’t mean we should settle for half-truths she says “Don’t let your oncologist or doctor protect you from the full facts. Push them for answers until you are satisfied you know it all.”

The first three points below cover some of the discussion with the oncologist; the first point is the one favoured by him. I agree that I need to do something more than the current protocol which includes diet, exercise, hyperthermia, rectal insufflation, supplements and more. In the later points I put forward further possibilities.

1. Hormones and radiotherapy. The oncologist is clear that hormone therapy and radiotherapy is the way forward. I’ve written about both of these in previous blogs (radiotherapy and hormones) so won’t repeat here, other than to say I had a rough ride with hormones previously. In discussions this time with the oncologist I could have a reduced package of hormones; starting with a month of 50mg bicalutamide then in two weeks to start monthly injections. Radiotherapy for a month would start early February.

Update 1/010/19 from Canceractive: "Research in Cancer Watch 2013 showed the best results were achieved when combining hormone therapy and radiotherapy. The biggest problem is that hormone control cannot be a long-term strategy. It would work providing the body didn't fight back and work harder to make even more of the depleted hormone. Unfortunately, it does. A basic law of animal hormones is homeostasis - put in simple English, if you throw one of them out, the body will try everything it can to restore the norm.

"Also, all forms of hormone treatment have side effects. Impotence, loss of sex drive, hot flushes, even breast swelling and osteoporosis.
"Worse, men who are treated for prostate cancer with hormone-targeted therapy have a higher risk of developing kidney problems according to research from a team of scientists at the McGill University, Montreal. Team leader Laurent Azoulay and his colleagues found that men taking hormone-targeted therapy were between two and three times more likely to have their kidneys stop working, taking into account other health conditions and medicines".

2. Proton Therapy. I looked at this a while back; the success rate for proton beam therapy is comparable to surgery and conventional radiotherapy, however there seems to be less risk of acute and long-term side effects such as incontinence, impotence and rectal complications (iv). Interestingly my oncologist suggested that the results are still not that convincing in terms of benefits. A Proton centre had just opened in Newport so I did explore this as an option but found prices for my treatment started at around £35,000 plus. Eek! I had also heard that there was a much cheaper option in Prague. However I heard back from them and they are now taking quite a few NHS patients and the price is comparable to Newport. Eek again!

3. Brachytherapy. I’m not sure how suitable my cancer might be for this but it was mentioned by the oncologist; sadly however in Gloucestershire this is no longer an option on the NHS. Apparently not so many guys requested this option and there are not enough urologists. Is this one of the impacts of starving our NHS of funds? Outside Glos you may well be able to get this treatment on the NHS and indeed one of the guys I met at the Prostate Cancer Support Group was the first in the country to receive this treatment.

4. What else? You can also see my musings a year ago around conventional versus complimentary options here. And here is my previous discussion about delaying treatment. I will be talking more with my naturopath and integrative doctor before making a final decision.

Email ThisBlogThis!Share to TwitterShare to FacebookShare to Pinterest
Labels: Hormones, My treatment, Radiotherapy