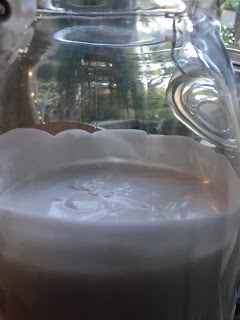 Kefir is all the rage at the moment - suddenly supermarkets are stocking it with Yeo Valley and other brands. I'm guessing readers will have come across it - a fermented beverage that is full of probiotics and beneficial enzymes - indeed it has as many as 30 strains of good bacteria. It is made using kefir grains (nothing to do with actual grains) to ferment milk, making it into a liquidy yogurt drink.
Allegedly kefir recipes in some parts of the world were closely guarded secrets for generations and passed on as part of a woman’s dowry. Marco Polo wrote about this drink and there are tales that the prophet Muhammad brought the grains to mountain tribes; some have even called them “grains of the Prophet”. They also get a mention in the Old Testament as the “manna” that fed the Israelites in the desert for so many years. “Kef” means to “feel good” in Turkish and certainly it has been shown to have a host of health benefits like tackling asthma but also possibly protecting against some cancers. More on health benefits can be found below.


Mass production of kefir didn’t begin until the mid 1900s in Russia. While it may not have been much in the UK, I know that in Norway, where my partner is from, it has been available for as long as her mum can remember. It was one of my go-tos in Norwegian supermarkets - they have some wonderful different brands with added blueberries and more. I have also made milk kefir in the past - It is worth noting that the fermentation process removes most of the lactose (milk sugar) so this is different from many other dairy products. However for vegans and some folks who want to avoid dairy, there is the option of coconut kefir. It seemed fun to explore the possibilities of this.....but before I get to that....

It is worth mentioning water kefir - both milk and water kefir varieties are rich in beneficial bacteria. However, as always, we should not get swept up in the idea that they are good for everyone - the advice is to check with your doctor before drinking - especially if you have any condition that weakens your immune system or for example are having chemo. Other folk I’ve heard that should check out or avoid are people with mastocytosis, are histamine intolerant, taking monoamine oxidase inhibitors (anti-depressants), those who regularly get migraine headaches and those with bowel problems or if colon cancer runs in your family.

So you can make kefir from water and sugar - these are different grains from the milk - and some have said it is similar to Kombucha - but Kombucha has a tart zing, while water kefir is sweeter in flavour. However many of us with cancer are trying to avoid sugar - for me I feel happier with the coconut kefir but it is argued by some who make the water kefir, that you can reduce the sugar content. This is done by allowing your water kefir to ferment until it is just a little bit sweet on the first fermentation (i). Then when it is bottled, there will be enough sugar, with the addition of fruit or fruit juice, for carbonation, but will have a lower sugar content once the second fermentation is complete (ii). Apparently using water kefir grains to culture coconut water also produces less sugar but this can’t be done all the time as it wears the grains out. 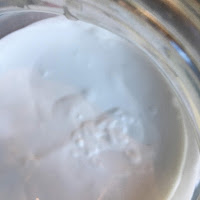 Coconut milk is made by grating and squeezing the flesh of coconuts. This is then filtered and diluted with water. We should remember that coconut milk is high in a type of saturated fat called medium-chain fatty acids - this is processed differently than the saturated fat from animal products. It is said that this fat will be absorbed more quickly by your body rather than being stored in adipose tissue for later use. Certainly there is a big debate regarding coconut oil; is it good or bad for someone with cancer (iii) - but that is oil rather than milk. On balance I think coconut is better than dairy for me so here are the details on how to make it... 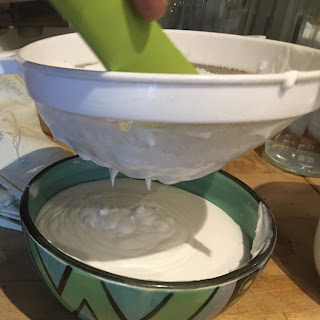 Using non-dairy leads to the grains withering and even dying over time; they need that lactose to help them thrive. Our grains have been used for quite a number of batches and they have lost their cauliflower shape and are more soft and mushy. They are ready for a revive!
One technique I have read about and am set to try in this coming week, is putting the grains in a bowl covered with milk - some recipes suggest to add one teaspoon of sugar. You then have to replace the milk every 48-72 hours. After a number of times the milk will begin to separate into a clear liquid at the bottom - that’s the whey. When there are signs of fermentation again it is time to start a new batch. One suggestion was to then start with one tablespoon of grains to every two cups of milk. It can apparently take some weeks to get back to full strength.

We’ve taken a break several times from kefir - basically you can rest the grains in the fridge, but the longer you rest the grains, the longer it will take to revive them. The grains also don’t have the same bacteria diversity present in fresh grains - this will come back in time. We’ve used the freezer to rest our grains just as they are - we didn’t dehydrate first as suggested below and they seem to have recovered alright.

Dr Axe lists many of the possible key benefits of kefir (vi); three key ones, that are important to those of us with cancer, are worth noting here:

1. Support to the Immune. One of the bacterias is specific to kefir alone ie Lactobacillus kefiri, and has been shown to help defend against harmful bacteria like salmonella and E. coli. The bacterias in the kefir help modulate the immune system and inhibit many predatory bacteria growth. Kefir also has an insoluble polysaccharide called kefiran, which a 2005 study found is antimicrobial and helps tackle candida symptoms and speed healing of external wounds.

2. Helps digestion. We know how absolutely essential a good microbiome is for health - and key in cancer. The probiotics (vii) in the coconut kefir are great at discouraging constipation, supporting good elimination, reducing side-effects of antibiotics and they will tackle pathogens.

3. Tackles cancer. Most cancer studies are with dairy kefir, but it seems the positive outcomes are very likely to be transferable to coconut kefir. One dairy-based kefir study showed that kefir can slow the growth of early tumors and their enzymatic conversions from non-carcinogenic to carcinogenic (viii). Meanwhile an in-vitro test in Canada showed that kefir reduced breast cancer cells by 56 percent (as opposed to yogurt strains that reduced cells by 14 percent) (ix).

Today I’m enjoying an Iced Cacoa Coconut Kefir - basically coconut kefir, a couple of ice cubes, a dessertspoon of cacoa and one of chia seeds with a sprinkle of cinnamon - allow to sit for 10 mins or so - yum! But also love a great dollop on quinoa porridge. It is a rather wonderful treat.
I still feel like I am learning with this coconut kefir, so I'd love to hear from other kefir-makers and welcome any tips, suggestions, corrections, thoughts and more.