I was fortunate to be in London on Saturday partly to join the charity Yes to LIfe’s Strategy Meeting - some will remember that it was the first charity logo I added to this website (see my film and blog of ex-chair here). I’ve since then, supported them with some of these blogs but also helping set up a Wigwam Support Group in Stroud (see more here).

My positive impression of them has continued to grow as they are working in that space of integrative health care - taking the best of both conventional and complimentary approaches to cancer treatment. This is not without some huge challenges that I may cover in the future, but for now it feels so very, very important that there is a voice of reason out there. Perhaps more about all that in a future blog but for now I wanted to share an exhibition that I managed to catch.

Virtually next door to the Friends Meeting House, where Yes To Life were meeting, is the Wellcome Collection - now that’s a place that aims 'to challenge how we all think and feel about health’. They had a free exhibition with two artists, Jo Spence  (1934–92) and Oreet Ashery (b.1966), who explore the representation of chronic illness and 'how it can disrupt and shape the way we think about the body, family and identity.'

Photographer Jo Spence documented her diagnosis of breast cancer and subsequent healthcare regime throughout the 1980s. The world was a very different place then with no internet to search for info and no massive alternative health movement. Yet in a series of documents, photos and writing, Spence documents how she rejected orthodox NHS medical treatment and explored Gerson therapy, acupuncture and Chinese herbal medicine. In one of her pieces (see photo left) she juxtapositions the choice or perhaps the lack of it, in the NHS, ie radiotherapy, chemotherapy and mastectomy, with the range of possible complementary options.

The Bristol Cancer Help Centre was set up in 1983 (now Penny Brohn UK) and gets a mention in her work - Spence went there and some of the newspaper clippings (see below) documented the struggles that nearly led to its complete closure - at that time the approach was thought by the established medical community 'to be on the very fringes of medicine'.

Here is a quote from Spence describing the doctor telling her she will have surgery:


"One morning, whilst reading, I was confronted by the awesome reality of a young white-coated doctor, with student retinue, standing by my bedside. As he referred to his notes, without introduction, he bent over me and began to ink a cross onto the area of flesh above my left breast. As he did so a whole chaotic series of images flashed through my head. Rather like drowning. I heard this doctor, whom I had never met before, this potential daylight mugger, tell me that my left breast would have to be removed. Equally I heard myself answer, ‘No’. Incredulously; rebelliously; suddenly; angrily;  attackingly;  pathetically; alone; in total ignorance. I, who had spent three years (and more) immersed in a study of ideology and visual representation, now suddenly needed another type of knowledge; what has come to be called ‘really useful social knowledge’. Not only knowledge of how to rebel against this invader, but also of what to do beyond merely reacting negatively. I realized with horror that my body was not made of photographic paper, nor was it an image, or an idea, or a psychic structure... it was made of blood, bones and tissue. Some of them now appeared to be cancerous. And I didn’t even know where my liver was located.” 1982–86 The Picture of Health?

Spence had no expectation that these complementary and alternative approaches to health would cure her but rather they would help manage the disease by supporting her overall mental and physical health. In the documenting her own treatment with photos expressing her physical and emotional state, she regained ownership of her body. Her doctor, Tim Sheard who also collaborated with her, said, ‘Spence is representing the honest emotions felt living in an unruly body that cannot conform to the pressures of female perfection expected and idealised in Western society.’

One of the descriptions of the exhibition calls on us "to challenge our understanding of ‘misbehaving’ or ‘untypical’ bodies, and reflect on how illness shapes identity”. While one of the photos is of herself, baring a scarred breast with her head wearing a motorbike helmet; the artist defiant in the face of death? The illness may have changed and disfigured her body, but it won't take hold of the whole of her. 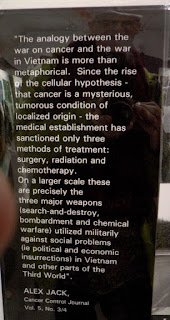 Her work is not about victimhood or heroism. Sometimes it seems amateurish but I loved how she used photography to empower. Some of what we see in the exhibition is what she called, 'photo therapy’, where the subject was able to control their image to help uncover and even represent feelings or ideas that might be repressed or hidden in some way. By working with the person in front of the camera they could become both subject and author of the image. I also loved how she rejected much of the war-like language that is used around cancer - see my previous blog on that here - and also the photo of one of the quotes she had in the exhibition (see left).

Spence died from leukaemia in 1992, a decade after her original cancer diagnosis. She was not commercially successful during her lifetime, partly because she struggled with using other peoples’ images for personal gain. She worked as part-time as a secretary to pay her bills - today though her work is critically acclaimed and respected. Her work has also toured many community centres across the country; the original work laminated by Jo to protect them.

The exhibition is on until 26th January:
https://wellcomecollection.org/exhibitions/XFHHShUAAAU_pE70

See also BBC TV's wonderful arts programme, Arena, about photographer Jo Spence and her journey with cancer: "It's also about the way she uses her camera, as a diary, a form of expression, an investigators tool, and most importantly a therapeutic process”: https://youtu.be/p-4s93Oj9mM

See also more about 'The Final Project’ about her reflections on her terminal cancer. See more including photos in this Guardian article: https://www.theguardian.com/artanddesign/gallery/2016/feb/16/photographer-jo-spence-the-final-project