I have a daily hot shower and at the end switch it to cold just like James Bond in the Ian Fleming novels (i); interestingly my CVS card number was 007 when I started showering like this (it has since changed)! My Dad was Scottish and I remember him describing it as a “Scottish Shower”. Of course there is a long, long history of cold water being used for health; use by Greeks, Spartans, Finns, Native Americans, Russians and more are all well documented.

It was the 1820s when the term ‘hydrotherapy’ got coined in Germany by farmer Vincenz Priessnitz. He claimed to cure pretty well everything including broken bones and erectile problems and saw hundreds flock to him including royalty. Popularity of hydrotherapy declined in the twentieth century but is seeing a bit of a renaissance.

For me it all started at Trew Fields 2018.  I joined others for an ice bath organised by folks who work with ‘Iceman’ Wim Hof; you can see a short film here taken at Trew Fields (ii). I watched with some nervousness, even fear, as the pool was filled with bag after bag of ice.

The session then started with us lying down on the ground and learning a breathing technique that involves thoroughly inhaling and exhaling. It has been described by Wim Hof as ‘controlled hyperventilation or power breathing’. You can see how that is done here (iii).

One of the tough things for me, about an ice bath (or cold shower) is this Wim Hof breathing. In the ice bath I found myself initially almost hyperventilating from the shock and I was sure I wasn’t going to stay for two minutes. Strangely after thirty to forty seconds my body relaxed, my breathing became steady and I didn’t seem to feel the cold in the same way and when it came to get out I felt I could have stayed longer. Someone said, 'adapt to the cold don’t fight it'. That was good advice. The right mindset is crucial so that you can hear your inner voice but also know that the cold will not harm but can make things better.

The sense of achievement was significant; as each group managed their two minutes in the ice there was clapping. It was some months later, after Trew Fields this year, that I caught a video of Wim Hof talking about his three-pronged approach; cold therapy, breathing and the commitment to stick with the approach. It was time for me to try regular cold showers.

I was a little daunted. Some twenty-five years ago I tried two minute cold baths for over a month to help with my ME/CFS that at the time meant I wasn’t able to work. It was very hard to do and I didn’t see any tangible benefits, possibly my health was too poor at the time - warm showers seemed so much nicer! I have also done some occasional wild swimming and often end up in the sea even when it is not at all warm! My partner is Norwegian and readily gets into the sea at 13 degrees (and has cold showered daily for many, many years). I take so much longer to get into the water than her and also will more readily find excuses to avoid it - but can’t let down my Scottish ancestors by letting a Norwegian go swimming without me! 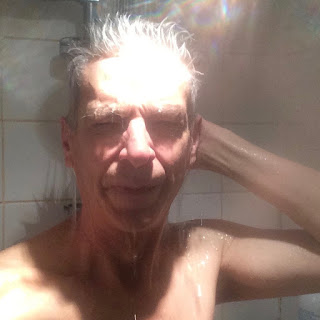 So why take cold showers?

Intuitively it feels right for me - but that doesn’t mean to say it was easy! I also take heart from reading the research on cold showers. The benefits listed - some with more research than others - include alertness, weight loss, better hair and skin, improved immunity and circulation, lower blood pressure, cleared blocked arteries, reduce muscle soreness after exercise, increased tolerance to stress and disease, relief of depression symptoms and even increased fertility (iv).

In terms of cancer I’ve found no evidence of cold showers impacts but clearly boosting the body’s physical and mental health must be good. There was a paper that hypothesised that repeated cold stress could stimulate anti-tumor activity but studies are yet to see if this is so (v). Interestingly cooling caps are used with some cancers and some chemo drugs to reduce hair loss while cryotherapy (extreme cold), is used to freeze cancer cells in the prostate (vi); clearly both these are different to showers!

One additional benefit of cold showers that many bloggers and vloggers talk about is how showers can help set intention. In a clip of film on the Trew Fields Festival Facebook page, Stage4 survivor, Mairead McWellness, says it was key in helping her get back into a “I can do this” frame of mind (vii).

In a similar vein, Joel Runyon at TEDxLUC, talks about how Cold Water Therapy can change your life and you can be more comfortable with the uncomfortable (viii). In the talk he says: "Every single time I find myself needing a little extra strength or a little extra courage to go to do something that is hard or difficult, or just a little bit uncomfortable, I take cold showers….If you’re not willing or able to be the type of person that is willing to be uncomfortable for five minutes alone in the shower, where the only negative outcome is you being cold for five minutes, and the only person affected by that decision is you, then how will you ever have the strength or the courage to choose to be uncomfortable in a situation, where the outcomes are so much greater, and the people affected by your decision far outnumber just yourself.”

One fascinating discovery coming out of Wim Hof's work is that he is now at a point where he, and others who have similarly trained using his full method, are able to voluntarily influence the Autonomic Nervous System. This has long been thought impossible and has now opened up new areas of research. You can see more in Wim Hof’s free e-book here (ix).

Of course there are a host of conditions like pregnancy and heart problems that need to avoid cold showers or baths. There is also evidence that prolonged immersion can pose very serious risks to health. Advice on the web is that older people or those with poorer health should also consider whether cold showers are right for them and if going ahead to consider a gentler approach. It is vital folk check for themselves whether this approach is at all suitable.

There are hundreds of suggestions on the web but, as Wim Hof says, you first need to commit. Find out more then commit to starting. Cold showers are awesome! Why would you not want to try?! You don’t need to commit for the rest of your life. I originally said I’d give it three weeks but four months on I am still doing it every day. See it as an experiment! Wim Hof has a downloadable sheet to tick off your showers - see here (x).

I started with hot showers like James Bond then finished with it on cold. This allowed me to start by turning it not quite to the coldest setting. In winter the water in our pipes seems too come up at  temperatures that feel like below freezing! I also started daily with 30 seconds of splashing cold water on myself but I was quickly able to get under the shower and extend it to over a minute or two. The initial shock has decreased somewhat but its still there! D*** that water can be so cold! In contrast I’ve read folk just do cold showers with no hot water first or start with only two showers a week; I guess we all need to decide what works best for ourselves. Certainly before turning the knob to cold I spend a long moment preparing myself; this helps make the shock easier to take.

Interestingly in one piece of research they found that cold showers led to fewer sick days; however it didn’t matter if the shower was thirty, sixty or ninety seconds (xi). However some of the other research says the showers have to be longer ie in the order of two or three minutes and Joel Runyon, mentioned above, talks about five minutes your body needs to adjust to the cold water and start stimulating all the positive health benefits that are known to be associated with cold showers. Wim Hof argues we all need to find what works for us but not more than five to ten minutes in a cold shower and never after we’ve eaten a meal. Amazingly Wim Hof has stayed immersed in an ice bath for 2 hours and managed that without freezing over nor sweating - but has been working on this for many years. I have a wee way to go!!

In terms of how cold? Again it is hard to find good info. One site says anything under 21C is considered cold yet that to me is warm!

Breathing? Wim Hofs particular breathing (iii) can be useful before the cold shower but it hasn’t fitted with my morning routine. The cold shower takes no extra time but I found the breathing needed me to create a space for that. I do the breathing routine a couple of times a week, but that needs to be a separate blog. Certainly after the first shock of cold shower, my breathing is now much more controlled and strangely I don’t feel cold when getting out - and often have a great sense of calm. 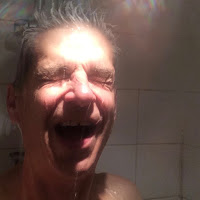 However while I’ve had calm after the cold showers, Wim Hof suggests some people will have wild dreams, feel unwell or seriously sad. He says this is part of the healing journey and if those experiences/feelings come we should go along with them. Also many of the cold showering 'fellowship' suggest we should have fun; I’m not one for singing in the shower but can imagine that might help initially with the cold? I’m not sure what other fun might be possible? Ideas welcomed!

Lastly I’ve read that the cold can be addictive. Some have suggested the cold shower might even be a ‘gateway drug’ to more ice baths and ice swimming! I’m not there yet but don’t have that resistance each morning that I had to a cold shower when I first started them. Enjoy!

(i) https://www.artofmanliness.com/articles/cold-shower-benefits/ and see my report and film on Trew Fields 2018: https://myunexpectedguide.blogspot.com/2018/08/a-cancer-festival.html

(ii) A short video story of Martin Petrus and Artur Paulins who taught an ice bath workshop at the Trew Fields Festival: https://youtu.be/HYOfQwEMAMs

Email ThisBlogThis!Share to TwitterShare to FacebookShare to Pinterest
Labels: My treatment