The great news about epigenetics 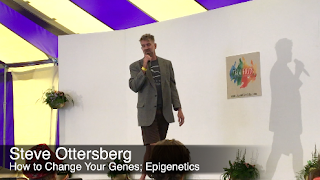 At Trew Fields this year (my film coming soon) one of the talks was by Steve Ottersberg and he helped me get a much greater grasp on the wonders and opportunities of epigenetics. This is all about looking at the heritable changes in gene expression that don't involve changes to the underlying DNA sequence or in other words a change in phenotype without a change in genotype. This affects how cells read the genes and can be influenced by many factors including our environment and our lifestyle - see also my blog on mind-body (i). Some of those epigenetic changes can have serious impacts that can result for example in cancer. What is exciting is that they are considered to be dynamic and modifiable by lifestyle choices and environmental influence. 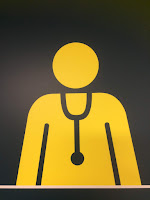 Many including great chunks of the medical profession still hold to the belief that genetic mutations (a sequence change inside your DNA) cause cancer, but in reality these changes account for less than 7% of the population. Indeed the so-called ’Somatic Theory of Cancer’ seems to be quite wrong.

Chris Woollams writes: 'What about the other 93 per cent of the population, who are also at risk? The truth about cancer is that the rest of us only very rarely develop a sequence change - a real mutation - in our DNA and thus produce a somatic cell' (ii). It is epigenetics that is now able to explain how cancer can develop. Critically four key factors seem to be at play; environmental toxins (eg smoking, drugs), poor diet, stress and hormones like oestrogen.

"Good diet, cutting stress and environmental toxins, balancing your hormones, taking exercise, oxygenating cells, having plenty of commensal (good) bacteria - these have all been shown capable of correcting the epigenetic damage. Indeed more than 65 natural bioactive compounds are known to be capable of correcting cancer cell structure. It’s not rocket science after all." Chris Woollams

It seems we are more a product of your lifestyle and environment than our parents chromosomes. Indeed there is growing evidence about how diet and exercise affects how our genes express themselves; turning good genes on and bad genes off. A study by Barres et al in 2012 showed this with regards to exercise (iii). Another by Dusek et al showed how after eight weeks of meditation gene expression was affected (iv).

All this is very good news! As Chris Wark, author and cancer ‘thriver’ (v), writes; “If my body created cancer then maybe it can heal it”.

In Steve Ottersberg’s talk I also learnt about single nucleotide polymorphisms, or SNPs (known as "snips”). When we make new cells, an existing cell copies its own DNA then divides into two. The two cells will both have a complete set of the DNA genetic instructions. However cells sometimes make mistakes during the copying and this can lead to variations in the DNA at particular locations and these are called SNPs. The differences created can influence a variety of traits such as appearance, disease susceptibility or response to drugs. We inherit our DNA from our parents and that includes our SNPs versions from our parents. SNPs occur almost once in every 1,000 nucleotides on average, which means there are roughly 4 to 5 million SNPs in a person's genome. Scientists are learning every day how these SNPs impact on our lives and indeed on cancer (vi).

I understand SNPs are variations in a single position in the DNA sequence - this is different from epigenetics where there is no change in the DNA sequence. So SNP is not an epigenetic modification, it's a genetic modification or mutation. But I think I understood that there are many evidences where SNPs have led to epigenetic variations. So, rather SNPs can be considered to be a medium by which genetics talk with epigenetics.

From my various searches into SNPs my Facebook feed now has adverts for companies that will look at my SNPs. I’ve not gone down that route as a recent metabolic analysis of an urine sample (more of that soon) gives some indication that I might have a number of key SNPs for example around absorption of folic acid. I think as many as one in two people will find it difficult to metabolise folic acid, so a SNP might help explain why my folic acid levels and indeed other B Vitamins are so low (vii). 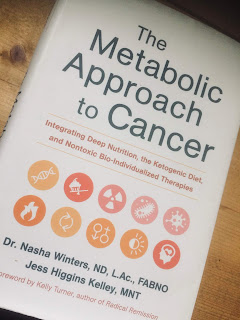 Interestingly Dr Nasha, who also spoke at Trew Fields this year, notes in her excellent book 'The Metabolic Approach to Cancer' that she sees Vitamin D receptor SNPs in almost all her patients and these patients need large amounts of supplemental Vitamin D than those who do not have the SNPs. I have been low in Vitamin D even with high supplementation although it is now out of the very low zone. She writes: 'Vitamin D receptor polymorphisms are also associated with more severe forms of malignancies in many cancers including prostate.'

A 2006 paper looking at studies into Vitamin D (viii) concluded: 'The majority of studies found a protective relationship between sufficient vitamin D status and lower risk of cancer. The evidence suggests that efforts to improve vitamin D status, for example by vitamin D supplementation, could reduce cancer incidence and mortality at low cost, with few or no adverse effects.'

Another example that Dr Nasha gives is that genetic SNPs in the cytochrome P450 system can either speed up or slow down the ability to detoxify compounds through the liver. Certain SNPs may show that a person is a slow metabolizer of coffee, for example, suggesting that person would be best to avoid coffee. I don't think I have this one!

The metabolic test is one way to look at some of this but testing my epigenetic profile could also provide cues as to why I am experiencing cancer - plus give useful information about what type of diet will best support my metabolism, any extra support my body might need for detoxification,  and more. But hey I need to prioritise where I invest in my health and at the moment I am working with the results of the metabolic test.


In short Western medicine seems to argue that faulty genetics and bad luck are the main factors to cause cancer.....that is slowly changing....and it is certainly far from the truth! Genetics and epigenetics are influenced by factors like diet - and genetic damage (like in my case; see here) occurs often from stuff like pesticides, radiation, stress and more. We now know that certain foods, for example, can help to protect and repair genes from that damage. We can change the destiny of our genetic health.