Exercise; what I didn't know

I thought I was pretty fit before my diagnosis, but since then my eyes have been opened.....

I think one of the many things that surprised me following my diagnosis, was the failure of doctors to talk about factors like diet and exercise and their impact on cancer. Not one of the consultants or doctors in Gloucestershire or Germany that I met, mentioned exercise. To be fair, the follow up with nurses after diagnosis did have a tick box exercise regarding any ‘concerns’ that included exercise, plus I was given a thick pack of leaflets, one of which mentioned exercise - but, hey, I thought I was fit.


I had heard that ‘rebounding’ was the best exercise for cancer and soon after diagnosis I got myself onto a mini-trampoline for ten minutes every morning. I had also seen the UK Government’s chart (iv) on what exercise we need to do - see graphic. So I thought, that rebounding plus walks in the week, would be enough and therefore didn’t tick ‘exercise’ as a concern on the nurses ‘Needs Assessment’ form.

I was wrong. Sadly this is a similar story about awareness regarding exercise, to nearly everyone I have spoken to regarding their cancer diagnosis. For many exercise wasn’t mentioned and if it was, the level of importance attached to it seemed small. This is, no doubt, a reflection on our society where so many of us are not exercising sufficiently for optimum health.

Since those early days of diagnosis and treatment I’ve looked more deeply at exercise. It is clear, and no surprise to hear, that those exercising reduce the likelihood of many illnesses including cancer. For example the BMJ in April last year showed bicycling to work was associated with a 45% reduced risk of dying from cancer (i); this is about folk hitting the target of moderate to vigorous aerobic exercise each day. Exercise can also reverse many years of damage caused by sedentary lifestyles.

But what of those of us with cancer? 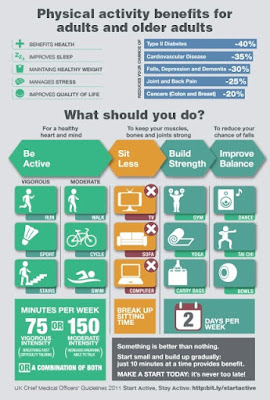 Here there is also plenty of compelling evidence that exercise is great for us. See for example:

- in 2014 a study of 4,623 Swedish men with localised prostate cancer found that those who walked or cycled for at least 20 minutes each day had a 39% lower risk of dying from prostate cancer and a 30% lower risk of dying from any other cause compared to the less active men (ii).
- in 2007  a study of 1,490 women with early stage breast cancer found that those who exercised, like walking for 30 minutes each day and ate more than five servings of vegetables and fruit per day, had a whopping half the recurrence rate after nine years compared to those who didn’t (iii).

This is the sort of research that I would like to have been pointed to by doctors; exercise can make a big difference.

So why did things change for me? At a Cotswold Prostate Cancer Support Group meeting I heard about the Next Steps programme being trialled in Gloucestershire…..

After a self-referral I was able to join the exercise group of the Gloucestershire Next Steps programme (v) - it is an NHS specialist cancer rehabilitation service that has since won an Award for Excellence in Patient Empowerment. It started for me with a one-to-one session then there were six hour long sessions at GL1 in Gloucester with physiotherapists. What was hugely useful for me was understanding exercise and where and when to push a wee bit harder. On their advice I purchased a £12 heart monitor that showed my rebounding at home was great, but actually I was not working up a sweat, nor really being aerobic. Without the support of the Next Steps team I would probably think I was doing the exercise I needed and was doing OK. In fact all the team were wonderful and supportive.

Of course now knowing that exercise is important can come with it’s own challenges; I am now worried that I am not doing enough!

It seems strange to have got to my age and not understand this, but I am not really one for gyms or measuring stuff. Well, things have changed in terms of exercise and I have now come to the end of my six weeks of sessions with Next Steps. I have significantly increased the rebounding. I’m also starting to understand the differences between health bounces for the lymphatic system, the strength bounce and aerobic bouncing. My improved strength and fitness showed in tests at the end of the last session.

I have also looked at increasing walking; parking the car furthest away in a car park and using stairs instead of a lift. At work I’ve even managed several walking meetings as opposed to sitting down; this has left me even more energised for the next bit of work.

I suppose it is obvious, when I think about it, that health and fitness do not necessarily go together. However I was startled to read that the average elite athlete dies by age 67, which is at least nine years before the average man or woman. Extreme exercise is not good for us. I also read that this year a study of long distance cyclists over 60 had the same level of T-cells in their blood as people in their 20s (vi). It is about getting the right balance; not over exercising or like me earlier this year under-exercising.

I still have lots to learn and also still need to build exercise more sustainably into my daily routines, but I am doing good. I’m also in touch with several others from the Next Steps sessions and delighted to hear that they are also building exercise into their routines; one now goes to the gym daily another has taken up cycling again.

I’ll end this latest blog ramble with all good wishes to others who are also embarking on this part of their healing. I hope to return to this topic with more info about Next Steps as the team have said they would be happy for me to interview them at some point. I should also state the obvious that this blog is not about advising what exercise anyone should take, as there are so many factors. Lastly here are a couple of links on rebounding:

Chris Wark’s blog and video on rebounding at: https://www.chrisbeatcancer.com/rebounding/

And I have used the first 10 minutes of this video as my warm up rebound routine: https://youtu.be/YgeSuV3JczY

(i) Association between active commuting and incident cardiovascular disease, cancer, and mortality
https://www.bmj.com/content/357/bmj.j1456

(v) See more re Next Steps at: https://www.glos-care.nhs.uk/our-services/specialist-care/macmillan-next-steps

(vi) Researchers at the University of Birmingham and King’s College London have found that staying active keeps the body young and healthy: https://www.birmingham.ac.uk/news/latest/2018/03/regular-exercise-slows-down-ageing.aspx
at November 12, 2018

Email ThisBlogThis!Share to TwitterShare to FacebookShare to Pinterest
Labels: Exercise, My treatment