Finished radiotherapy; should I continue hormones?

I, like many, have had a rough ride on the hormones the two times I have taken them - see previous blog here (i) and here (ii) - so have been wondering if I need to extend them beyond the end of my radiotherapy treatment. Well, for me it hinges to some extent on my diagnosis; am I high risk, as the oncologists have said or intermediate risk? Click on tab below to see other blog posts about radiotherapy, my experiences and how I managed.


Well, there are various ways that the risk has been defined but one of the most widely used is the one developed by the National Comprehensive Cancer Network (NCCN), a not-for-profit alliance of leading cancer centers. My understanding that NCCN assess as follows:

Other organisations are similar. I was T3a with Gleason 7 (3+4) and PSA once over 20 but more recently over 10. The 3a extraprostatic extension is without seminal vesicle involvement. See great article re Gleason at: https://sperlingprostatecenter.com/gleason-grade-group-system/

The T3a puts me clearly in High Risk which my previous oncologist liked to stress at what seemed like every opportunity - was probably his concerns when I was talking about alternatives to radiotherapy. However, while my first MRI in July 2017 labelled me T3a, the MRI in January 2019, following the treatment in Germany (see about transuretheral hyperthermia here iii), reported T2c/T3a. Now put this latter figure with my Gleason and PSA and I am clearly borderline. 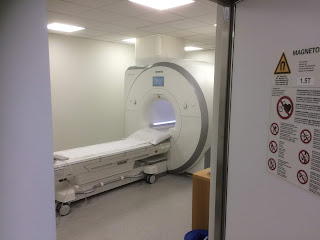 What treatment is recommended?

I have heard that taking the hormones after radiotherapy can increase 15 year survival by 10% or more. However when I came to research it, it was not so straight forward. My current oncologist kindly supplied me with a great 18 page summary of research into hormones and radiotherapy with links to the research itself (iv). It was quite a read! And not always so easy to unpick. I also read a number of other reports by the NCCP (v) - and learnt that level one studies are the most thorough, level two the next then level three (vi). Here are some of my findings from those reports that resonated with my situation;

Intermediate-Risk Prostate Cancer - 'All radiotherapy treatment options are appropriate (EBRT and/or brachytherapy) to be considered for patients with intermediate-risk prostate cancer. (Consistent level 2 or 3 studies; or Extrapolations from level 1 studies). Hormonal therapy should be considered in addition to EBRT. (Level 1 study). Androgen; deprivation therapy for four to six months  should be  considered in conjunction with EBRT. A pooled analysis suggests that a duration of six months is optimal. (Level 1 study).'


However the research seems to contradict itself at times. In possible contrast to the above, the Radiation Therapy Oncology Group Protocol 92-02 trial of T2-4 men they found that at 20 years, long-term ADT significantly increased 15-year disease-free survival with 15.7 versus 10.0 percent with short-term 4 month ADT (vii). Meanwhile a RADAR study of 1071 men showed at 10.4 years that an 18 month duration of ADT was associated with a significant reduction in prostate cancer-specific mortality compared to 6 months ie 9.7 versus 13.3 percent (viii).

So there is a favorable and an unfavorable intermediate risk! The former possibly doing worse with ADT while the latter group doing better with ADT (ix). One report in 2016 writes: "The role and duration of ADT, however, remains a controversial issue (x)”.

Indeed! More research is needed! Looking at my tests it is hard to see where I fit, as I could fall into either category although possibly more likely the less favorable; however without further tests I won’t know for sure - and I want to avoid another biopsy - see my blog (xi). Saying no now doesn’t mean I won’t use them again if needed. I am also aware that the longer you take them the less effective they are so maybe keeping them for a possible need in the future might be good? Sadly I can’t find research to indicate whether or not this might be true!

So I have to sit with not knowing for sure what might be best? Or do I? 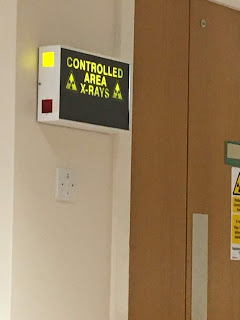 The research is not so clear but other factors also play a part - my reaction to the hormones is very strong with many side effects that significantly adversely affect my wellbeing. However key in all this for me, is intuition. See my blog from a couple of months ago here (xii). There was and is a deep knowing, that more hormones would not be best for me. Of course I discussed all this with my oncologist and she was great at listening and agreed that I was borderline. So it's no to more hormones after the radiotherapy.

Of course I am not free for a while - the hormones do remain in the body for some months, so while my last hormone treatment of three months finished on 26th February it will be a while before I stop having those symptoms. In fact at the moment they seem to be worse as my body perhaps struggles to regulate itself?

PSA bounce and the 'nadir'?

Bounces are periodic fluctuations to the PSA that can occur years after treatment and are not to worry about. They are seen as more than 0.2mg/nl increase but less than 2.0 ng/ml above the lowest level (nadir) it had reached thus far, followed by a decrease to as low or lower than the previous nadir - see blog to understand more at: https://pcnrv.blogspot.com/2018/03/bounces-after-primary-radiation-therapy.html

Following radiotherapy, a recurrence of prostate cancer can be defined as a PSA value of 2μg/L above the nadir after treatment. I read that it is important not to misinterpret PSA bounce as a biochemical recurrence following radiation. This phenomena tends to occur within one to two years after radiotherapy. The PSA nadir is the absolute lowest level that the PSA drops after treatment (and can take a number of years to reach). The PSA nadir can be important in further diagnosis and treatment.

While 2017 research notes (xiv): "Nadir PSA at 0.06 is a strong independent predictor of biochemical disease free survival (BFS) in patients with intermediate or high risk prostate cancer treated by definitive EBRT and ADT. PSA levels after ADT and EBRT were typically obtained every 4 months the first 2 years and every 6 months thereafter. These values were recorded, and the lowest PSA value attained was considered as the nadir PSA.”

Where am I now?

Well a lot of the docs say now is the time to wait and see if the radiotherapy has worked. That doesn’t feel right to me. I’ve said before it makes no sense to me if all we do is remove the cancer - surely what caused it could still be there? I’ve also written lots about mind-body including the Bristol Whole Life Approach used at Penny Brohn to maximise our health (xv). I know that that approach will give cancer the least likely chance of it returning. So now is the time to continue to develop my protocol again - since diagnosis I have been working at many aspects including diet, exercise,  saunas and more. All that will continue and I’ve adjusted my supplement protocol in recent weeks - see below for latest. As noted previously this is always under review as I stop some, restart others and introduce new elements.

Current supplements (that I’ve written about previously; click on tag or use search box):

Just stopped these elements as bladder is so much better:
Uva Ursi
Echinacea

As I write this it is some seven weeks since I finished radiotherapy ands I’m doing well; only slight awareness of rectal inflammation discomfort, am only going twice to the loo at night compared to eight times before so a significant improvement in the bladder inflammation, hormones are still impacting with hot flushes, muscle wastage and fatigue - of course hard to tell what is causing fatigue at the moment - is it the hormones or radiotherapy? A friend was off work for four months following his treatment. Or is it the current situation we all find ourselves in; such strange times causing stress in new ways as we face fears, new challenges at work or home and in our communities? Certainly I’m not sleeping as well at the moment despite not being woken by my bladder.

Well I want to review where I am at and look more at hormones - this is a topic I’ve come to several times but there are many questions - and am still struggling to understand! A long while back my oestrogen levels were tested privately and were high. I embarked on reducing this with supplements like indole 3 carbinol and Vitamin D and others that supports the liver.

You see as Chris Woollams writes:  "studies from Australia, Singapore, Japan and MD Anderson in Texas, which all pointed in the same direction: Namely that as a man ages, his oestrogen levels increase, while his testosterone levels decline. And this leads to an era of higher prostate cancer risk. Despite all this, current orthodox medical treatment for prostate cancer still aims to cut nasty old testosterone". You can read more in his article at: https://www.canceractive.com/article/the-reality-of-lowered-testosterone-and-higher-oestrogen-in-men-counters-orthodox-theories-of-prostate-cancer

You can also see what might help in this other article by Chris Woollams:  https://www.canceractive.com/article/natural-aromatase-inhibitors

And an interesting video looking at how DHT is protective against prostate cancer - this seems to go against some of the orthodox medical views but supports Chris Woollams approach: https://www.youtube.com/watch?v=69z5igxLokM