Another look at my Ethythrocyte Essential Fatty Acids 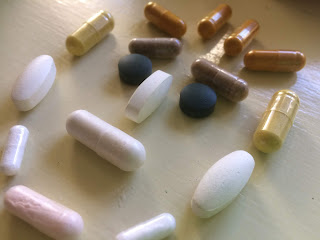 Before I start, I want to say again, that for me, healing isn't just supplements, but looking at nutritional aspects can support a wider protocol of healing actions. I don’t think by themselves supplements are sufficient to remove cancer in most cases. I also need to say again how complex the interactions are between nutrients, genes and our environments. We all have different requirements and those requirements change as we go through life.

In my last blog I wondered why I wasn’t absorbing minerals. In this blog I look at my my latest ‘Ethythrocyte Essential Fatty Acids’ test results. These results are four months on from the last test and also raise some questions about absorption. There are thirty plus different Fatty Acid readings and I needed the help of the doctor who has been supporting my nutritional approach to understand them. As noted before, all this stuff about fats is important as some view that prostate cancer is being fed by fats; to see more on this see my blog and film on Jane McLelland’s work around starving cancer. So lots to think about….here are a few of the more interesting outcomes from the tests:

Most of the seven Omega 6 fatty acids mentioned in my latest test were lower than last time. Arachidonic Acid (AA) is low. AA is pro inflammatory which is not good for arthritis, cancer and other conditions - indeed there are specific papers showing AA stimulates prostate cancer cell growth (i). So could this be good as my AA is low? Possibly not, seems to be the answer, as my p53 gene has a common mutation (see earlier blog) which research suggests, a higher AA level could be of benefit?

In trying to unpick this I learnt that Niclosamide, a drug used to deal with tapeworm infections, has been found to attack cells with a p53 deficiency. This is a deficiency that the majority of cancer cells possess, causing cancer cell death and reducing tumour size by up to 50%. There is also some evidence that Niclosamide can attack/restrict metastasis and cancer cell migration plus inhibit cancer stem cells; it seems it attacks cancer cell mitochondria and blocks multiple signaling pathways of cancer stem cells (ii). Indeed Jane McLelland lists it in her 'Metro map’ (see my previous blog) as Niclosamide would be part of blocking the 'glutamine pathway'. Niclosamide also has minimal effects with healthy cells - in fact it has been around for more than 50 years and is deemed a safe, cheap and effective drug by the WHO. Niclosamide is also poorly absorbed from the intestinal tract, which explains its good tolerability in humans. Sadly virtually all doctors in the UK won’t prescribe it for cancer.

A Medical Express article writes of research into p53: "They examined the metabolic profile of niclosamide-treated cells and found that the p53-deficient cells had significantly more of a fatty acid known as arachidonic acid. Their investigation revealed that the mitochondrial uncoupling caused by niclosamide increases the calcium concentration in a cell, which boosts the production of arachidonic acid. The team showed that this increase is normally counteracted by p53, which switches on two genes that break down arachidonic acid, ALOX5 and ALOX12B. These genes were not activated in p53-deficient cells, allowing arachidonic acid to accumulate, and causing mitochondria to release a molecule known as cytochrome c, leading to programmed cell death” (iii).

Of course many other aspects complicate the picture. If fats feed prostate cancer is it good that levels are generally low? Should I continue to keep AA low? Green tea and other anti-cancer nutrition I’m taking will also play a part in lowering the AA (iv)? Is the mutation of my p53 the same as cells being p53 deficient? If it is, then should I perhaps seek to raise AA? Especially as things have not progressed so positively; is it worth taking a different tack?

In the short term I have added a small portion of organic grass-fed beef and wild oily fish once a week which could see AA rise. However I am wary for several reasons which need discussing more fully in another blog. Suffice to say that any causal link between organic meat and cancer is not straightforward. Zinc and Magnesium supplementation should also play a role with AA, but as we’ve seen to date that doesn’t seem to have had an impact (see my previous blog here).

My Alpha-Linolenic Acid (ALA) has come down further to being at a very low level. This is very surprising as I have increased ALA rich foods like flax seed, chia and walnut intake over the last months and supplemented with Krill Oil. The picture regarding ALA and prostate cancer was in the past somewhat confusing, as research studies have contradicted each other showing ALA intake is associated with both an increased and a reduced risk of prostate cancer. However a Harvard study last year of 50,000 men has confirmed that it doesn’t appear necessary for men to limit their intake of alpha-linolenic acid from foods (v). Furthermore there is some evidence to show flax seeds are helpful (vi) although flax seems to be a poorer source of Omega-3 than say hemp oil. 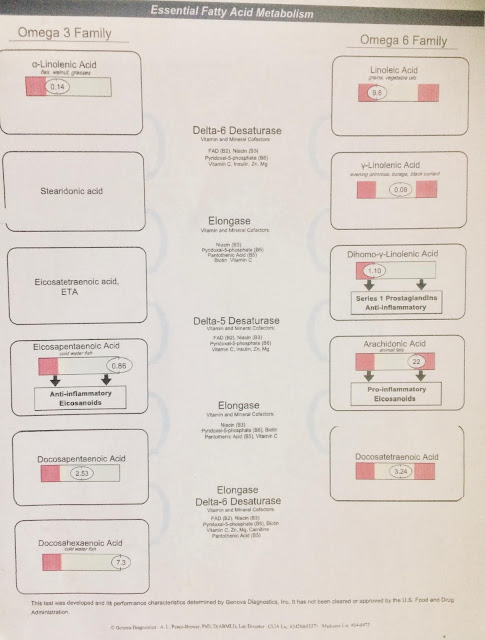 So what is going on with my ALA? ALA cannot be naturally made in the body so we must get it from diet so that it can make make the long-chain omega 3 fats – EPA and DHA. So am I converting too much ALA? If I am, I am still not converting enough into the ETA (see diagram) (vii). This is hugely complex to me and I am still struggling to see how enzymes work in converting ALA into other acids.

Another aspect to consider is the AA/EPA ratio (viii). This has improved from 1 to 35 now to 1 to 17; this is still considered much to high and could indicate high cellular inflammation. Could the inflammation be a sign of damage to cancer cells? Can I improve the ratio further by more omega-3 in the diet? Health Matters comment: "EPA is anti-inflammatory and should balance the levels of pro-inflammatory arachidonic acid. Although EPA can be produced from the essential fatty acid, ALA, dietary intakes of this fatty acid are generally poor. The conversion also requires the action of the delta-6 desaturase enzyme that may be low due to inadequate Zn, Mg, or vitamins B3, B6, and C. Such an enzyme impairment would be indicated if EPA is low and ALA is normal or high. High levels of saturated, monounsaturated, trans fatty acids, and cholesterol also slow the conversion of ALA to EPA.”

Well my EPA is low but ALA is also low. So again is this pointing to not taking up enough Zinc and Magnesium to raise AA levels? Looking at the diagram it seems that a vitamin B complex could also support the delta-6 desaturase enzyme in converting the acids. Interestingly higher levels of the P5P form of B6 have recently been reported to be associated with a dramatically lower risk for all types of cancer (ix).

Lastly it seems sensible to continue with supplementation of omega-3 oils. So fish, krill or algae oil? A good question which I’ll cover in the next blog.

A wee bit of good news?

Oleic and Stearic acid - these readings have gone down since last time. I discussed these in a previous blog; the ratio is now 1.2 which is a shift in the right direction in terms of cancer.

Trans fats - these had been raised in the last test, now they are all in the normal range. Good stuff!

Well in this blog and the last one I have outlined some minor changes to my current regime. I will try and bring these together in the next blog along with the other next steps I’ve been taking.