I had transurethral hyperthermia treatment last November in Bad Aibling, a blog soon about that, but in the meantime I caught up with Alexander Herzog who used to work at the clinic I attended. He wasn’t there when I was, as he has established his own hospital in Nidda-Bad Salzhausen, where he has continued to specialise in oncology and develop hyperthermia treatments. His view is that some orthodox treatments showed benefits but that often the side-effects could be extreme. He therefore has worked on the use of complementary therapies to maximise the effects of orthodox treatments whilst reducing side-effects. 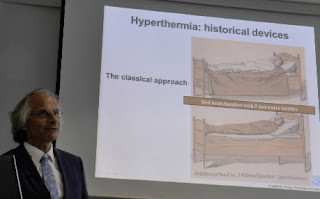 Alexander gave us a talk at the Guildford Wellness Day. I’m hoping that the whole talk will be available soon on the internet. He started his talk explaining hyperthermia was about heating up tumour tissues. The treatment has a long history - see the photo from an old medical text book using hot water bottles!

Of course it has developed over the years and there are various approaches that can enhance chemotherapy and radiation treatments but also used to treat cancer. Alexander took us through a whole series of case studies like the photo below which shows a rectal cancer disappearing - and explained some of teh science behind it. 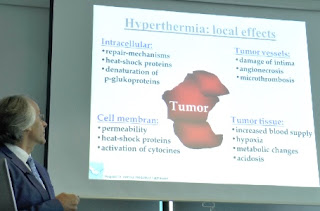 In the talk Alexander looked more closely at orthodox, complimentary and alternative approaches. He feels that there is often mutual demonisation with orthodox being seen as being about science and aggressive cold, harmful treatments, whereas alternative medicine is soft, safe, warm and about emotions. He thinks this feeds uncertainty in patients and sometimes leads to wrong decisions.

Alexander suggests that up to 80% of all patients with cancer are looking for complimentary and alternative treatments - yet most don’t tell their oncologists. One of the reasons for this he suggests is that doctors have such little understanding or training of complimentary medicine and many are dismissive. Certainly some complimentary treatments don’t have lots of studies but many do - and many can significantly impact on quality of life.

Health practitioners are often coming from different positions. Orthodox medicine wants to ‘hit' the cancer whereas complimentary is about building the strength of the body to tackle the cancer. In the talk Alexander outlined some of the complimentary treatments that offer some important benefits, including mistletoe therapy, Japanese mushrooms, Ozone therapy and more. See my previous blog about the mind-body revolution that is unedrway - and that Dr H is very much a part of. 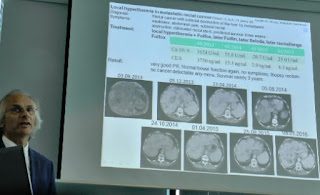 Chris Woollhams has a great website with info about cancer. His pages on hyperthermia are worth a look. See his overview at: https://www.canceractive.com/cancer-active-page-link.aspx?n=3078
See more about Dr Herzog at: https://www.hospitaldrherzog.de/
at October 12, 2018